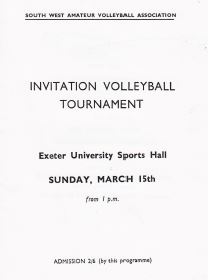 In the November Newsletter we highlighted that the SWVA (originally SWAVA) will be 50 next year and one of the first events run by the association was an invitational Tournament between a SWAVA team and the two top teams in the country at the time.

It’s well worth a quick look, admission was 2/6 (younger readers may have to look that up) and the SW team was drawn from Speedwell, Bedminster Down, NE Somerset, Hartcliffe, Exeter University VC and Townhill Tigers from Swansea.

The Southgate team included players from Czechoslovakia, Switzerland, Mauritius as well as England Internationals. Sparks appeared to include the rest of the England team, including the Coach & Captain and one player from London.

Also in the program, a short write up on the start of the AVA (Amateur Volleyball Association) and how to subscribe to the quarterly journal “Volleyball”, which cost 7/6 per annual subscription.

Dates for the Diary include a number of SW tournaments plus a three day demonstration at the Bath & West Show, Shepton Mallet.