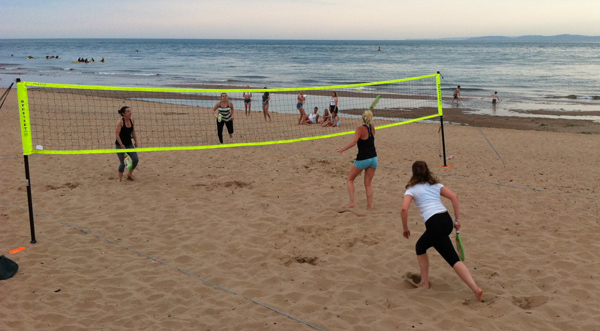 A new addition to the Exmouth Beach Volleyball Club this week was the introduction of the sport of beach tennis. The sport is played on a beach volleyball court and has already been introduced at other beach volleyball venues around the country. 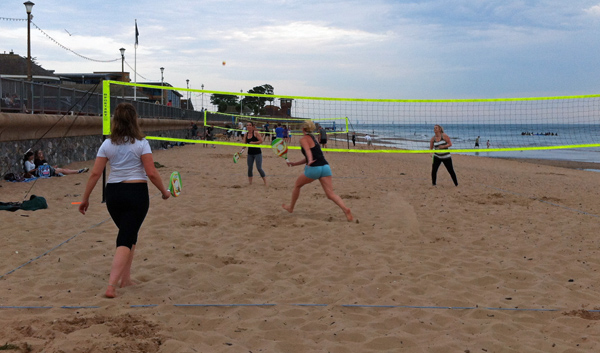 Beach Tennis is a cross between tennis, beach volleyball and badminton.  It’s a fun sport suitable for all ages and abilities, ideal for families, groups of friends, leisure as well as professional players.

Beach tennis is played on level sand with a same size court as the volleyball court 16 metres in length, 8 metres wide. The net is set at 1.7m.
The game is played with a carbon or carbon/fiberglass racket without strings and a low compression orange ball.
Usually doubles is played although singles can be played on a slightly smaller court, 16 metres by 4.5 metres.
Scoring is similar to tennis although the server has only one underarm or over arm serve played from behind the back line.Either player on the opposing side may return the serve. The serve alternates between all four players.
There is no advantage in the scoring so the next point after deuce wins the game but otherwise normal tennis scoring 15-0, 30-0. There are no lets….if the ball hits the net, strap or band and goes over then the ball is in play.
Change of ends is exactly the same as tennis..after 1 game, 3 games, 5 etc .
There are many different scoring formats, 1 set, best of 3 sets, best of 5 sets, timed matchplay but the chosen format should be agreed before the start of an event or match.
A team wins the point when the ball hits the ground inside the lines of the opponents’ court or opponents hit the ball out or in the net.
Men must hit underarm serves in mixed doubles
Tie break change of ends is every 4 points . 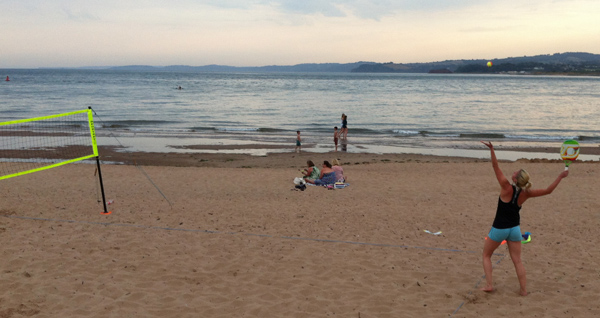 Many thanks to Isla and her sponsors for providing the equipment, you can read more about beach tennis at the Beach Tennis UK web site.