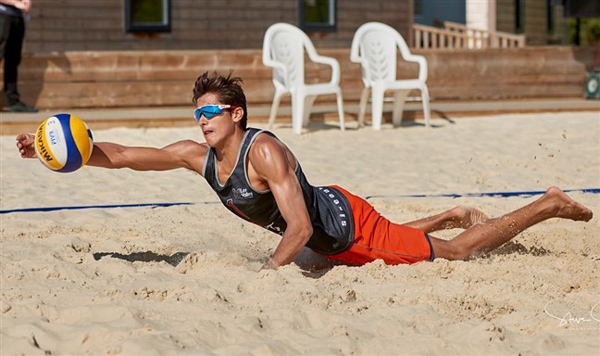 The Bello twins’ preparation for the CEV Continental Cup started in March when they went to Sydney for the FIVB World Tour 3-Star event but they lost in an epic three set encounter to Olympian and World Championship silver medallist Jonathan Erdmann – and partner Max Betzien – of Germany. A training camp followed and from then they have continued working in London.

Last week Joaquin suffered an injury during training and the doctor advised him not to play this week in order to be fully fit for the Continental Cup. Chris Gregory was in Portugal and he agreed to be Joaquin’s replacement for the Swedish World Tour 1-Star event in Göteborg.

Twenty-four teams had to play for four places in the main draw of this early season event and the scratch partnership won the first set comfortably but their opponents, Jannis van der Ham and Thijs Nijeboer of the Netherlands, played very aggressively to win the second set. In the decider, the English pair shook off a slow start to recover from 11-14 to 13-14 but it was not enough to seal the game. Javier said afterwards that he found the opportunity to play with Chris Gregory and to train together just awesome and added that they are both feeling great for the Continental Cup.

Javier (pictured) and Joaquin Bello were due to go to Kuala Lumpur next week but decided not to risk making Joaquin’s injury worse and have withdrawn from the tournament for medical reasons although Javier has continued his training and Joaquin is returning to the court this week. “We feel confident that our plan should allow us to play our best Beach Volleyball in a month’s time,” Javier concluded.

Both players will be with their regular partner at the Feel Good Too centre in Leyton on May 25-26 in the men’s event for the 1st Round of the CEV Continental Cup when they compete against Switzerland, Armenia and Bulgaria. The England teams selected will be Joaquin and Javier Bello and Chris Gregory/Issa Batrane.

There will also be a women’s tournament featuring England, France, Belarus and Northern Ireland where Vicky Palmer/Jess Grimson and Ellie Austin/Anaya Evans will carry the English flag.