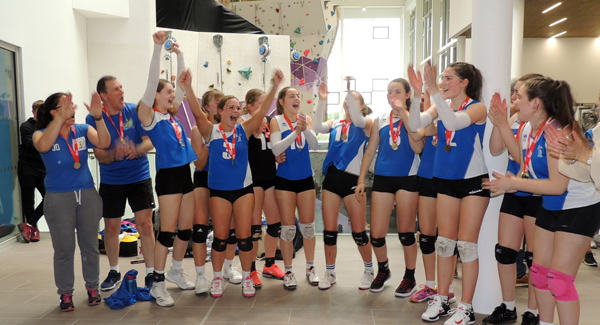 The Inter Regional Championships is a great annual event to be involved in, from back ground admin staff, sponsors, coaches, parents and the players themselves. When it all comes together and you end up on the winning side, it’s time to celibate all the hard work.

This years it was the SW who were crowned U17 Girls National Champions and leading the teams celebrations above is team captain Kaja Jankowska (no. 3), we caught up with her and asked about the experience:

For me the journey started the moment I got onto the minibus. With everyone excited it was very loud, partly also due to the music and singing. The journey to our hotel went really fast and when we arrived I was in high spirts as we settled into our rooms and then decided to all gather in Catherine and Kate’s room (or the hub), as we had a small rave, testing the speakers for the competition tomorrow. Following this, we had a team meeting where we discussed our aims, goals and values.

We then did a team bonding activity which was entertaining where we had to find a different person for each trait that we shared, for example height, favourite music and dream job. However, this didn’t go as planned as not many people shared the same job or same holiday destination so everyone ended up making it up which actually made it more funny and from that moment, I felt like our team had really got to know each other and no matter what would happen tomorrow, we would still have fun and enjoy the experience. 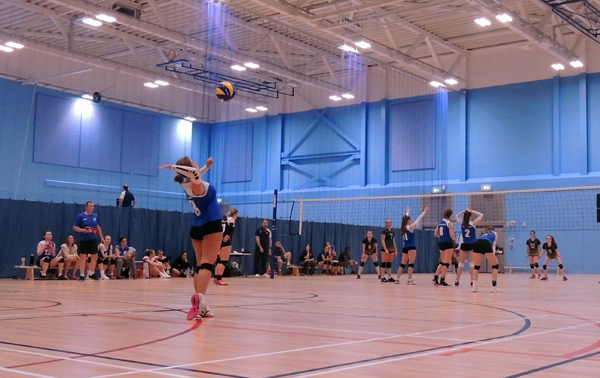 Saturday morning started with an early breakfast and a lot of tired faces. Many people rested on the 15-minute drive to the sports hall, despite the music being played from the speaker. Finding the sports hall was our first challenge as we went around in circles trying to find it and asking people along the way. Eventually we made it and as we walked in, I immediately loved it as the courts were modern with a fantastic wooden sprung floor.

At this point, I felt nervous as it had finally hit me that today we were going to play 3 pool matches and then a quarter-final – this was going to be a long and tough day. This was my last year and I wanted to play the best I possibly could and with the squad we had I knew we could go far. 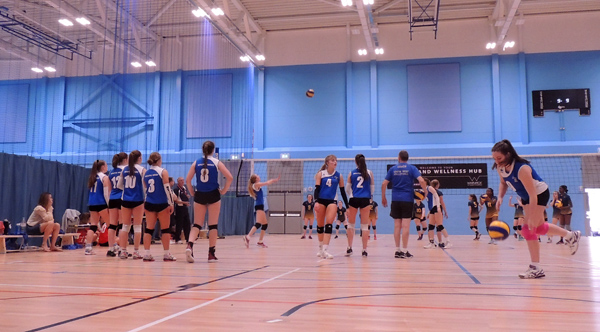 This was proven correct as we played our first pool game against East Midlands, a strong opposition with tough serving. We had a slow start but by the end we were playing like a well organised machine, resulting in our first success – the beginning of many. After our reffing duty and a rest, we were all nervous to play London who looked like our strongest competition in the pool.

Due to our nerves, we gave away the first set although it was very close. And as we switched sides I said to my team ‘lets win the next two’, which is exactly what we did. The match against London was amazing, everyone played so well all around, and no one gave up on the balls chasing them to score us those points. After this game, we all knew we could get to the semi’s, maybe even the finals. Our final pool game was against South East, again which we won 2-0, leaving us top of the pool and allowing us a better chance to progress to the semi’s as we would be playing the team that came fourth in the other pool in the quarter-finals. 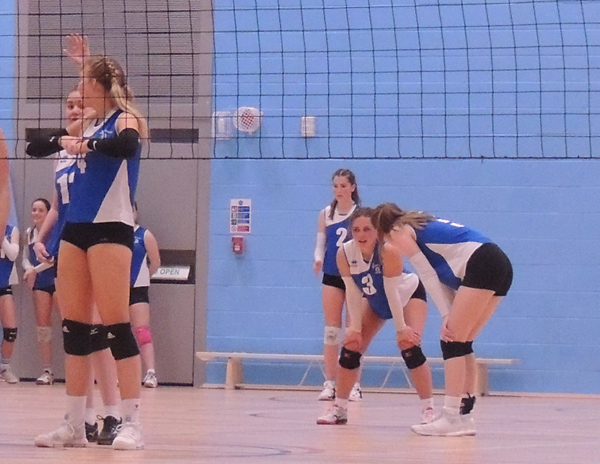 After a rest of two games we warmed up ready for the quarter-finals, playing ‘Playlist 2’ from the 2 speakers and getting pumped up for the match knowing we had to win this to be in the semi-finals. Our competition was against East, a team that has done well in the past at the inter regionals. At the start we gave away points as we were anxious but then we pulled away and were back on form leading us to a 2-0 victory- we were in the semi-finals!

Going back to the hotel after the day’s events, everyone was exhausted yet also very awake from all the adrenaline. Again, we all gathered in each other’s rooms talking excitedly about the games and how well we had played and already thinking about the next day. On that evening, the U17 boys had arrived, and together as the south west U17 squad, we ate dinner – a short walk from the hotel – which filled us up leaving us very bloated.

We then decided to hang out on the benches outside playing cards and chatting, we even attempted to play the mafia – which most people still don’t understand how to play. It was a very relaxed atmosphere and soon the exhaustion of the day kicked in and we separated to go back to our rooms.

The next morning, we were able to have a slight lie in due to winning the quarter-finals (which was our main motivation the previous day). Most of us had had a good night’s sleep (however a few hadn’t due to noise disturbance from some rooms above from 1:30-5:00!). As I packed my stuff together, I was excited and ready to play, knowing that with the team we have we could make it to the finals. 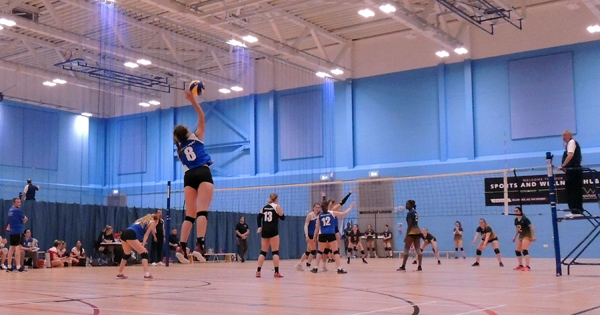 When we arrived at the University of Warwick’s sports hall, my excitement mixed with nerves as I got ready to play against East Midlands again – our competition in the semi-finals. We had beaten them the day before 2-0, however it was a close match and we knew they would want revenge so we couldn’t be overconfident and had to go with the mindset that they will be stronger than yesterday. As it was, they were stronger, but so were we. Again, the South West stormed off to an amazing start winning 2-0 and progressing to the finals for the first time in over 5 years! So far, we had had a 100% success rate in this sports hall, and we were either going to continue or end this streak after the finals.

As we waited on tender hooks to see if London or North West were to be the other finalists, we discussed tactics and prepared ourselves for the tough game ahead. As soon as it was announced North West were our competition, we all became nervous as they were defending their title, and as a team (mostly made of Tameside club), had been winning a lot such as the U18’s cup competition. 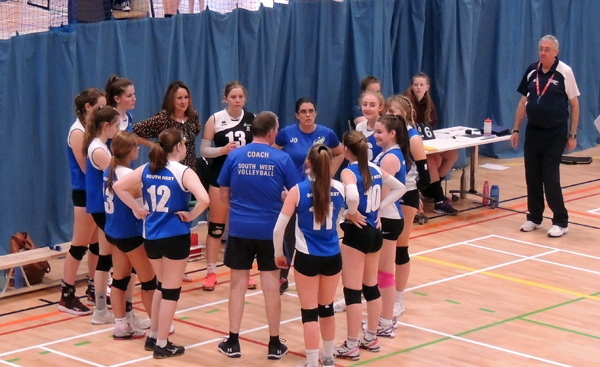 This was going to be a tough match, yet we were all determined to win. As players from other teams such as Yorkshire, London and South East showed us their support we became even more determined. The London coach said, ‘If we could take a set off them so can you’, and at this point, that was all we wanted to do.

With the warm-up over, we were ready to start. With a slow start, North West got a 5-point head start, but as we warmed up, we fought harder and harder closing the gap until we finally were level. Then with some great serving spells we managed to pull away to be in the lead with North West always close but never closing the gap. We took the first set 25-23 and the noise and atmosphere were incredible as all our parents and supporters shouted, ‘Let’s go south west!’

We lost the second set 25-19 but then won the third and final set 15-11. It took me a while to register this as everyone screamed and gathered in a circle celebrating. Some of us (myself included) cried from happiness and because this was going to be my last year. The crowd was amazing and I’m so grateful for the support as it really helped us fight for the balls and got us up again when we were down. We could always hear it and I will never be able to forget that last mistake North West made making us national champions and gold medallists. 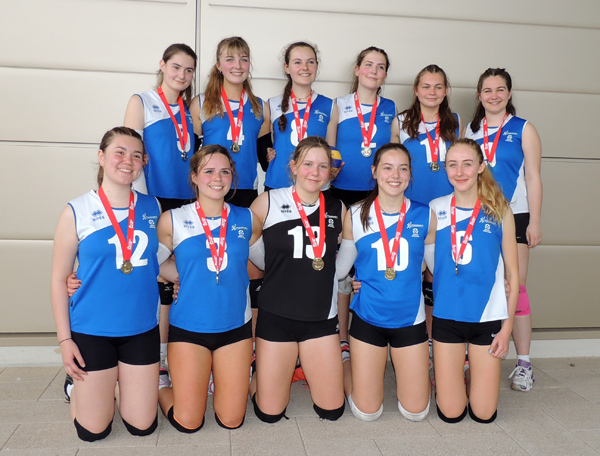 Thank you to Dave (head coach) and Joana (assistant coach) for all the hard work you put into the team in preparation for the inter regionals as well as the support during the tournament. I would also like to thank Carole McCabe, our team manager, Neil Bentley and Dave Reece for organising everything, as well as Terry who drove us all in the minibus to Coventry and put up with the music and our singing. Also, thank you to the players for nominating me as captain and for supporting me throughout. Without everyone’s contribution we wouldn’t have gotten as far as we did – so well done to everyone – we managed to achieve our goals and aims! 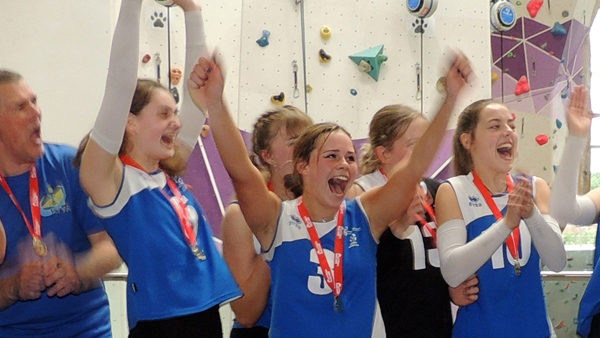 This entry was posted in Coaching, Home, Junior, News, Volunteering. Bookmark the permalink.