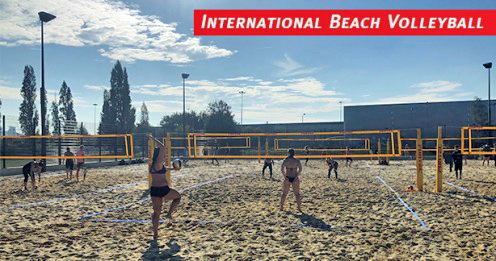 Next summer international beach volleyball will return to England as London will play host to the first round of the CEV Continental Cup.

The European Volleyball Federation (CEV) have confirmed that the Feel Good Too Centre in Leyton (pictured above) is one of eight venues which will host a Continental Cup round one event on May 25th and 26th 2019. The announcement is more good news for beach volleyball following the story this month that the British Volleyball Federation has gained aspiration funding to support getting Team GB to 2020 Olympics in Tokyo.

“It’s an honour that the CEV has selected England as a host venue for the Continental Cup,” says chairman of Volleyball England, Adam Walker. “It provides brilliant opportunities for volunteers, fans and athletes to come to London to be part of a prestigious competition, which is a route for qualification for the Olympic Games, and could inspire more people in England to get involved in beach volleyball.”

Played over three rounds between now and June 2020, the Continental Cup sees international teams face-off with the winners of the cup gaining qualification for the 2020 Olympic Games in Tokyo. The event in London will form part of round one.