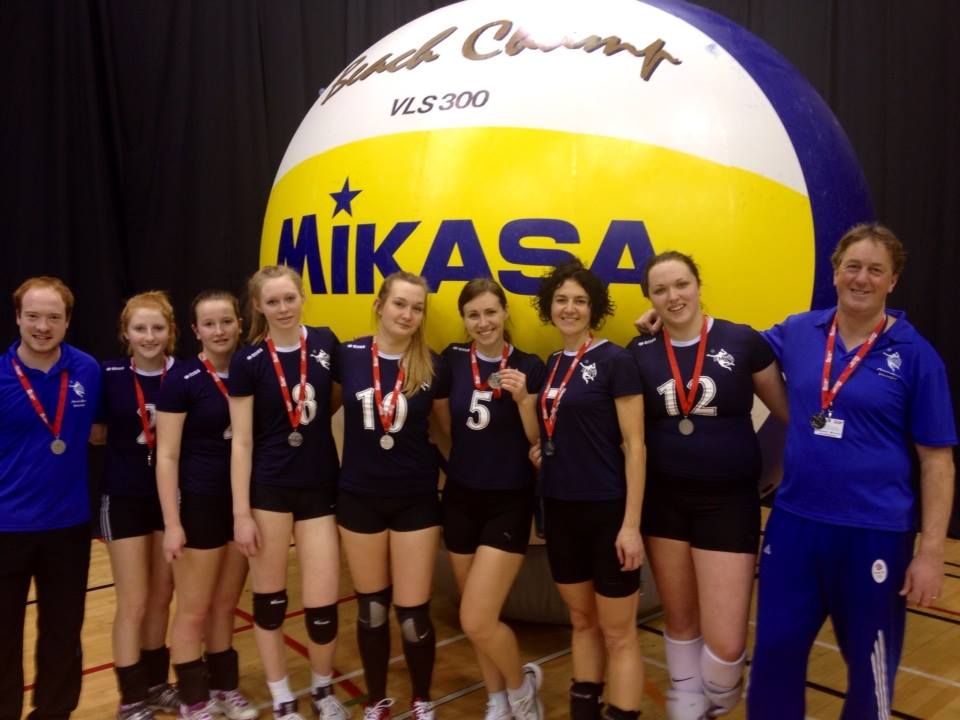 For those that are unfamiliar with this event, the National Cup Finals weekend is the showcase event for Volleyball England.  Over 200 teams compete in various cup competitions throughout the season, all vying for the chance to play in the most prestigious event in the Volleyball calendar. The atmosphere and buzz is second to none and in most cases is the rare occasion where teams can play in front a grandstand full of supporters, with music and match commentary as well as the whole weekend being live streamed so supporters all around the world who can watch the action unfold as it happens.

PMVC Ladies were competing in the National Cup for the first time this season. Their Cup run saw them knocked out of the Cup competition in the Second Round against NVL Div 1 side Bristol 1 in a close match. This saw them automatically entered into the Shield where they enjoyed success against NVL teams – Div 3 South’s New Forest Ladies in Round 2 and Bristol 2 in the Quarter Finals. They then faced their stiffest test in the Semi Final against current Div 2 South Champions and National Shield champions in 2013, Tendring. They pulled off the biggest upset in the competition by beating them 3-1 and sealing their place in the Final.

Plymouth Marjon Volleyball Club (PMVC) are the first ever non NVL team to compete in the National Cup Finals Weekend from the Southwest of England. That itself is an achievement and tagged them as the underdog in every round of the competition. In terms of their form this season, they are currently unbeaten in the Southwest League with 2 games remaining and are on course to win the League for the second successive season. Their only defeat was against Bristol 1 in the National Cup.

When looking at the squads for every other team in the National Finals, all teams had a full squad of 12 including Libero/s. PMVC were the only team not utilising a Libero and were only able to field 7 players out of their squad of 8. 4 of their squad are 16 years old or younger. This further emphasises how impressive their route to the finals has been against well established and successful National Clubs.

Their opponents in the Final were last years Shield Runners up Loughborough Students (LBS). With a full squad to hand and in the top half of NVL Division 2 North, they were a strong and well established squad and they were unlucky is the National Shield Final in 2013 as they lost to Tendring in 5 sets. With this in mind they were determined to avoid the runners up spot again.

The early afternoon match was the 3rd Final on Saturday’s programme and with both the previous games being one sided 3-0 games, this match provided the crowd with its first compelling battle for supremacy. The first set was all about momentum, Loughborough started brightly and were looking comfortable on the big stage. PMVC on the other hand looked nervous and were behind going into both Technical Time Outs (TTOs) 8-4 and then 16-5. PMVC then started to find their rhythm and started to assert themselves in the match. With outside hitter Megan Leeds finding gaps in their backcourt and clever hitting by Ellie Cranch and Caprtain Liene Knupke, the southwest side clawed the score back to 10-17. The teams traded points and eventually LBS won the set 25-19. However PMVC had the momentum winning 14 points to Loughborough’s 8 in the last passage in Set 1.

Set 2 saw Plymouth take the early advantage with some service aces from Knupke and a killer bock from Ellie Cranch to go into the first TTO 8-6 up. After the break PMVC continued their new found confidence and the crowd were entertained with some long absorbing rallies. PMVC defended well enough to go into the 2nd TTO 16-10 in the lead. When play continued, Marjon were cruising to victory in the set at 20-14 but LBS tunred the tide with some excellent attacking play to force PMVC coach Steve Allen to use both his timeouts to stop their momentum. with LBS taking the lead 22-21 and then level to 23-23 it became a straight shootout for the set with both teams aiming to go two points clear. LBS had the first match point at 24-23 but Setter Marina Baker quickly snuffed out a second ball hit to draw level. PMVC then had set point at 25-24 and despite great defending LBS drew the score level again. LBS then had set point again but again PMVC saved it and then outside hitter Katrina Kozuleva hit a beautiful crosscourt hit to get their second set point. The set was sealed with an ace and PMVC drew the game level at 1 set all (28-26).

In the 3rd set, LBS put the SW Champions under pressure early and led in the first TTO 8-4. With some back court spiking from their captain and excellent serving from Cranch, PMVC drew the scores level at 12-12. With some excellent court coverage by Kate Wilkins, PMVC took the lead for the first time at 14-13 but LBS crept into the lead at the 2nd TTO 16-15. With all to play for, Loughbrough were able to convert defence into attack and started to pull away with the lead. At 21-17, PMVC weren’t having much luck as the referee changed his decision due to a line judge’s call at a pivotal point. With the disruption, Plymouth lost their focus and the set 25-20.

The 4th set started much the same as the others with Loughborough dominant again and leading 8-3. PMVC staged a mini revival at 12-8 down but LBS kept pushing hard with the finish line in sight and went into the second TTO 16-9. PMVC weren’t going down without a fight as they provided some hope with more effective hitting from Knupke as Victoria Wilkins took charge of the setting duties whilst also making vital defensive pickups. They were back in the game at 20-15. LBS snuffed out their late charge though and eventually won the set 25-19 and were crowned Shield Champions 2014 with a 3-1 win over Plymouth Marjon.

After being presented with their runners up medals, emotions ran high for the Plymouth team. Their amazing run in their first year in the competition had come to an end on the biggest stage. Coach Steve Allen had this to say about his team “The team are just emotionally wiped out. Our whole journey to Kettering has been such an emotional roller coaster. All I can say is Wow! Whatever the result, our little family team made it all the way to the National Finals.”

He went on to thank each and every one of his players including Valeria Minaeva who was unable to make the Finals but had played in every other round en route to the Final and his Assistant Coach Matthew Rhymer who took charge in his absence for the Semi Final win over Tendring.

Having played in the biggest match in PMVC’s short history, Club Chairperson, Kate Wilkins added “It was great to have such positive support from the crowd especially those that travelled up with the team and also having everyone else at the club following the live stream at home. It has been a true fairy tale that we will never forget”.