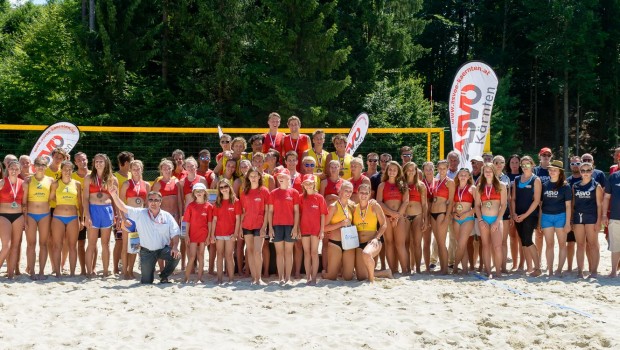 The Academy of Beach Sports added to their beach volleyball international reputation as three of their athletes competed in the ASVO Beach Trophy in Austria. Anaya Evans, Sam Dunbavin and Ellie Cranch, also of PMVC, along with Joel Roberts of Wessex, represented England in the U20 competition against nations such as Italy, Germany and Brazil. Denise Austin, Head coach of the Girls Junior Beach Volleyball Programme entered the two teams in order for them to experience a high level of volleyball at an international tournament.

Cranch and Evans played some exceptional volleyball. The two girls, who are in school years 10 and 11 were playing against girls 4 years their senior. This, however, did not intimidate them and their aggressive serving and dogged defence made them a hard opponent to beat. Their weekend highlight was a 2-0 victory over the Brazilian representatives. Brazil are arguably the best beach volleyball nation and so this victory against a team who competed that the U19 Brazilian National Championships shows the quality of play the girls produced. The girls finished in 6th place out of the 8 teams in the tournament.

This tournament was Dunbavin and Roberts first international tournament together. They were drawn in a very difficult pool with other well established pairs. Both boys dealt with the pressure and intensity of the volleyball well. They served well and placed some exquisite attacking shots amongst the power spikes they both strike so naturally. They defended well against a barrage of attacks and pushed several teams close in their tightly contested games. The boys finished 8th and will be able to take this experience with them as they look to continue to develop as athletes.

Many thanks go to Mike Evans who was team manager for both of the teams whilst in Austria.

This entry was posted in Beach, Junior, News, Tournaments. Bookmark the permalink.