Volleyball England are delighted to announce that, out of the 24 National Squad athletes who were nominated for a SportsAid grant, 8 of them have so far received their grant.

SportsAid is a charity that helps young sports people overcome the financial challenges they face in their bid to become Britain’s next generation of sporting heroes. The charity’s patron is Her Royal Highness, The Duchess of Cambridge. The charity is able to award the grants to athletes as it receives donations from partner organisations and then distributes the donations to athletes in the region of the sponsor.

Athletes are nominated by the Junior and Cadet National Team Head Coaches (both beach and indoor), are then put forward by Volleyball England to SportsAid.  Sports Aid then looks in the athlete’s local area for suitable donors who would like to fund their awards.

The volleyball athletes to have received grants so far are:

The SportsAid scheme is a great benefit to both the athletes and the sponsors, with Milly Smith benefitting from MyLotto24 increasing the number of athletes they support to 50, up from the 32 they had last year. Andrew Poole, from the Corporate Affairs Team at MyLotto24 said, “2014 was a fantastic start to our partnership with SportsAid and so we are delighted to announce an expanded team of superb athletes for 2015. We look forward to meeting the athletes and their families over the coming year and to running a more comprehensive programme of events and support to add value beyond the significant impact of the financial awards.”

The grants prove a real help to the athletes, with Yasmin Kaashoek being able to use her grant to contribute to the training costs that she and her family will have incurred in preparing her for the upcoming Continental Cup Round 3, in which she has been selected to play for the England Senior Beach team. 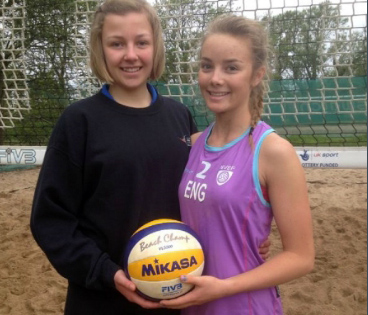