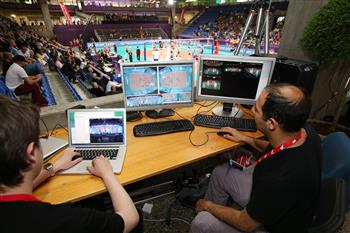 Fans can relive the excitement of the 2014 FIVB Volleyball Women’s World Championship with a different insight thanks to the innovative new Volleyball Tracking System.

Continuing its efforts to technologically develop the sport of volleyball, the FIVB has invested in the VTS which provides state-of-the-art real-time statistics and live data from matches. Supporters can now access this information for the two semifinals and thrilling final between USA and China from Italy 2014.

The tool provides statistics on movement, the speed of players and the ball as well as the strike angle from spikes. All this information was available throughout the two semifinals as well as the bronze and gold medal match. Fans can relive the match through the Volleyball Tracking System point by point on the Italy 2014 website.

Developed by the start-up PlayfulVision, the tool has already been tested at the FIVB Volleyball Women’s Club World Championship 2014 in Zurich as well as at the Montreux Volley Masters.

While other sports monitoring systems exist in international soccer competitions and basketball for example, this one offers several advantages. The Playfulvision system is fully automated, which makes it cheaper and easier to install. In its professional version six cameras placed around the field or court are connected to a computer.

This innovation is based on three algorithms developed at the Computer Vision Laboratory. While players can always be located on the screen via an overlay with the colour of their jersey and number, the challenge was to achieve this recognition continuously, even when players are in groups and hidden behind others.

“Up until now, most of the analysis on volleyball was done manually so annotators that are annotating this data manually can do a great job but, for example they cannot annotate the speed of the ball, or the postion of the ball,” Dr. Horesh Ben Shitrit (PhD) of PlayfulVision said. “With our automatic tools and with the video cameras that are surrounding the court, we can precisely find the position of the ball at all times and also the postition of the players.”