Cary Wicks – Volunteer of the Year 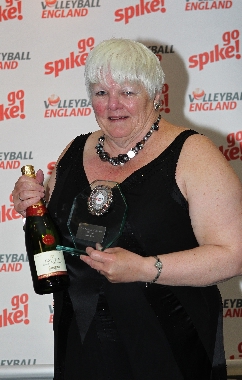 Cary Wicks from Bournmouth, Dorset has been named Volleyball England’s New Volunteer of the Year.

This prestigious Award is designed to recognize a volunteer who has begun their involvement in volleyball within the past year and have already made a significant contribution of time and effort to the volleyball community.

Volleyball England received numerous strong nominations for this Award from across the country.  Cary was selected as recipient of the Award by an independent panel comprised of well respected sports professionals from a number of organizations.

Cary stood out due to the amount she has managed to achieve within a year and also the uniqueness of what she has done.  Cary’s daughter Lucy is in the GB Women’s Volleyball Team.  Cary played an integral role in gaining support (financial and otherwise) for the Great Britain Women’s Volleyball Team after their funding was cut.  She has also helped the Team to deliver a volleyball legacy across the UK.  Key elements Cary took responsibility for were: organising and managing training week in Poole, for the whole squad; launching the Adopt An Olympian scheme and editing the GB Women’s supporters bi-monthly newsletter.

The New Volunteer of the Year Award was presented to Cary at the Volleyball England Annual Awards Evening at the National Volleyball Centre in Kettering.  Awards were presented by Audrey Cooper (GB Women’s Coach) and Harry Brokking (GB Men’s Coach).