In the Ladies league, Torexe find themselves one win ahead of Wiltshire Mavericks and Yeovil. Just behind are Kernow (4th) and Cheltenham & Gloster (5th) who are also on 16 points.

In the Men’s league, City of Bristol currently have a one match advantage over Cardiff Wildcats with Yeovil in third. Beach Academy & Torexe are just behind, also on 14 points.

In the Play of the Match Award, Magda Morgan (Kernow) has a clear lead with seven nominations so far and hence tops the Ladies Table. Likewise Tim Latcham (Beach Academy) currently head the Men’s POM table by one. 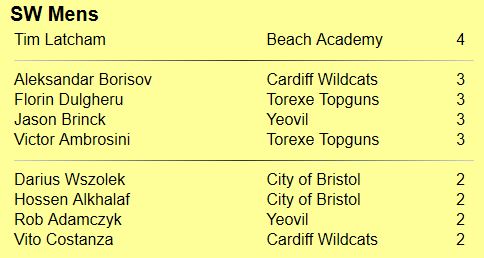