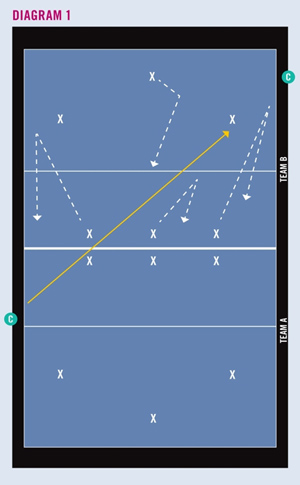 [Volleyball Magazine have the following item on line this month]

When volleyball moved from side-out to rally scoring, attacking in transition took on a whole new meaning. Before, when errors did not result in points for the opponent, players would just take a rip at it in transition, going for the kill and suffering no consequences when an error occurred. In today’s rallying-scoring game, players must manage the game more and implement more risk analysis when taking a swing, especially in transition. (A team is attacking “in transition” when the offensive opportunity is generated by the team’s defense, as opposed to being on offense off of serve receive.)

Championship teams achieve success attacking in transition. It is an area that you need to focus on in order to be effective. The first thing to do if you want to improve your transition attacking is to accumulate some transition-attacking statistics, if you haven’t already. Some coaches just tally attacking numbers as a whole, but breaking each player’s attack numbers into side-out and transition provides opportunity for further analysis. Our program at Springfield has attacking statistical goals for each position, and they are broken down into overall, side-out, and transition categories.

I compare the importance of transition attack to the difference between a regular sheet cake and a wedding cake. Anyone can open up a box, mix in the ingredients, bake the batter, and add some frosting to make a sheet cake—and many teams can side out and establish a pretty good block and defense. However, a wedding cake has the cake and frosting, and then it has flowers, lights, columns to divide layers, and statues of the couple on top. All those elements make the wedding cake special, and great transition attacking adds that special element to help a team play at a championship level.

In transition, we teach our players to “drop, run, hop, and sometimes shuffle.”

Read the full item at: http://volleyballmag.com/articles/43512-win-the-transition-attack