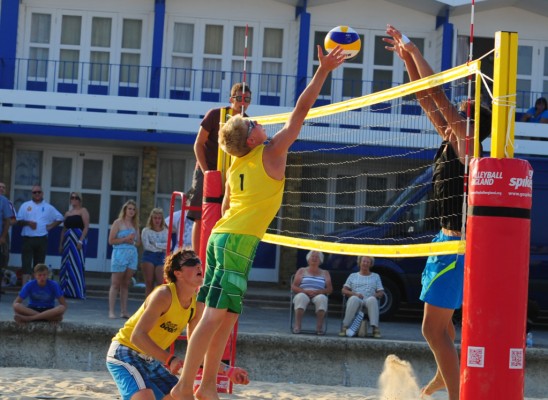 The Sandbanks CEV Beach Volleyball Festival hosted 210 teams over 3 days, for a fantastic weekend of Beach Volleyball. Teams from all over England and Europe made the journey to Sandbanks Beach in Poole. We were especially delighted to welcome back 12 junior teams from Landstede Volleyball in Zwolle, Holland.  The tournament is fast becoming their favourite event on the summer beach tour calendar.

48 teams competed in the South-West Schools Championships organised by Denise Austin on the Friday, whilst the tournament infrastructure was being set up.

Come the Saturday morning, we had a blue sky, no breeze and rising temperatures.  Following a group warm up by Fitness First which filled the promenade with players, volunteers and even some passers by joining in the fun, play kicked off at 9.30am Saturday morning with players of all ages showing off their growing talent and excellent skills on court. The fantastic performances by our young athletes continued throughout the weekend attracting lots interest from the general public who stayed and watched to find out more about the sport.

Breaks in play on centre court were filled with games aimed at getting people involved in beach volleyball, such as; serving the ball in the bucket and a rally with a giant beach ball! The tournament was also visited by 3 local Olympians, Dan Hunter (Team GB Men), Lucy wicks (Team GB Women) and Ben Pipes (Team GB Men’s Captain) who were on hand to answer questions, sign autographs and have photographs with our young budding Olympians.

With brilliant sunshine all weekend and temperatures of up to 28 degrees, players and volunteers were very grateful to Fitness First and ASDA for their donations of bottled water, and also Boots for providing a full range of much needed sun cream.

As well as Fitness First and ASDA, the Sandbanks Committee would like to give a huge thank you to the following people, companies and organisations who have helped to put on such a brilliant weekend of Beach Volleyball, whether it be donating prizes or helping with the equipment necessary to run such a large tournament; the CEV, Sportset, LeAF Academy, Bournemouth University, Volleyball England, Borough of Poole, Poole Tourism, Hall Hire, Breeze Volkswagen, Becky Ross, Anglo-European College of Chiropractic, Animal, Nandos, Pizza Hut, Snowtrax, Compton Acres, Farmer Palmers, The Tank Museum, Splashdown, Beaulieu and all of the parents and coaches who helped the tournament run so smoothly.

Chairman  of Wessex Volleyball Club, Geoff Allen said “When the weather is so good, everyone enjoys their beach volleyball.  But there is a lot of planning and hard work that goes into making an event like Sandbanks run smoothly and a massive thank you is due to the group of Wessex parents who give their time so freely.  We were honoured that the CEV chose to support Sandbanks this year.   Hopefully, this will show them that such support can bring great results.”

The competition results for the weekend are as follows:

The competition results for the weekend are as follows: