The 2015 Snow Volleyball Tour will be getting underway in Europe soon, you can check out the tour news and info at www.snowvolleyball.com

The Snow Volleyball adventure began in 2008 amid the mountains of Wagrain. For the first time in the history of this winter sports resort, net posts and pitch lines were dug into the snow at an altitude of around 1,850m. The initial event at the Flying Mozart mountain station between the two ski chalets “Kogelalm” and “Gipfelstadl” attracted hundreds of astounded yet thrilled spectators and offered the perfect location for the coming year. The mix of top-level sports and extreme weather fascinated fans and athletes alike. 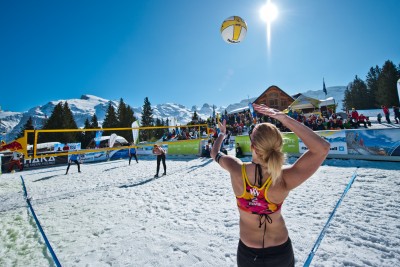 This rapid development took its next logical steps in 2013, 2014 and 2015, when the event series was expanded to include Switzerland (Engelberg), Italy (Kronplatz) as well as Spindler Mühle (Špindlerův Mlýn) in the Czech Republic). International encouragement from participants, the media and sponsors continues to be huge, so the Snow Volleyball Tour 2015 powered by Amway looks set for another exciting year.

Future of the sport

Chaka2 GmbH works assiduously with all national associations to strengthen collaboration on an international level. One clear goal of the movement is to acquire global recognition and introduce as many people as possible to this sport on snow. We are therefore now working hard to organise venues for the official European championships in 2016.