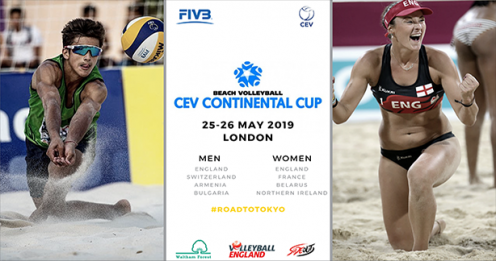 International beach volleyball is returning to London this May and there’s even more exciting news – fans can be there for free!

England will be competing in the European Federation (CEV) Continental Cup at the Feel Good Too Centre in Leyton on the weekend of May 25th and 26th.

There are 300 priority FREE tickets available now, with entry to over 1500 more fans available who will gain free admission just by turning up on the day. If the event does reach maximum capacity, fans will be let in on a ‘one in, one out’ basis.

As well as an incredible weekend of beach volleyball, the event will be a complete fan experience. Local organisations and schools have volunteered to display live music and entertainment to spectators. There will be a great range of food outlets too, including cuisine from some of the competing countries, as well as a pop-up bar which has been made specially for the event and will be packed with drinks from local breweries.

As beach volleyball returns to the capital, the weekend promises to be an unmissable weekend of international beach volleyball. As the first round of the CEV Continental Cup, the event, which is being delivered by volleyball event specialists SideOut, could be a road to Tokyo 2020 Olympics for the teams.

The England men’s team will face Switzerland, Armenia and Bulgaria, while the England women do battle with France, Belarus and Northern Ireland. The teams that qualify will progress to round two of the CEV Continental Cup, with the winners of the eventual winners of the competition will automatically qualify for next summer’s Olympic Games in Japan. As an added incentive, the third and final round of the competition will only be for teams which haven’t already qualified.

The round one event is played in an exciting format that the crowd in Leyton will really be able to get behind. There is a Davis Cup-style format with teams consisting of two pairs and playing off against other countries in ties which are the best of three matches. The first pairs will go head-to-head, and the second pairs will play it out. If the tie is level after two matches, a decider will be played where the teams can select any two from their four players. The England team selections were made in February and the teams are:

To guarantee your entry, book your FREE priority ticket now.