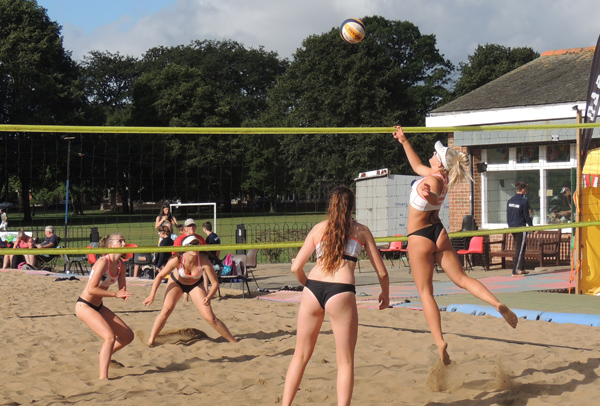 Day 2 at the Home Nations

In the women’s competition England 1 and 2 were undefeated and progress directly to the semi finals on Wednesday. After the Pool play England 1, 2, 3 and 4 took all the top places with Wales  and Scotland 1 in 3rd places followed by England 5, Scotland 2, Scotland 3 and Northern Ireland.

After the cross over play offs Wales, Northern Ireland, Scotland 2 and Wales will play for places 7-10 on Wednesday with all 5 England teams plus Scotland vying for the top 6 places.

For all results and photo gallery go to: Inter-beach.net

Live streaming for the finals tomorrow.

Day 3 and the final day of competition at the Home Nations Beach tournament became the day of the Golden Set with so many matches going down to the wire.

England men continued to dominate the semi finals with the English pairings of Lucas and Bialokoz , Goalen and Anderson beating Murray and Anderson, Hook and Richie from Scotland 2 both matches 2-0.

In the other thrilling semifinal Wales played Scotland 1 and with a tie after the first games another Golden Set was set up. The pairing of Netley and Morgan from Wales then dominated the play off set winning 15-10. 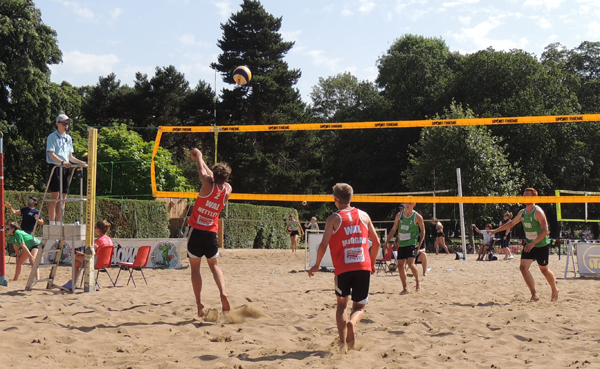 The final saw England men dominate from the beginning. Goalen and Anderson won 21-11, 21-8 and Lucas and Bialokoz 21-12, 21-12 to take the gold medals with Netley and Morgan and Mexon and Frazier settling for the silver.

The women’s competition was close on day 3 with several matches needing the Golden Set to reach a result. The best of the matches saw England 3 taking England 1 to a Golden Set. The bronze medal match was between England 3 and England 5 with England 3 taking the honours.

In the Gold medal match the England 2 pairing of Freitas and Tucker forced the Golden Set but they were unable to overcome the England 1 pairing of Keefe and Austin who took the set 15-8.

After a great 3 days of performance volleyball the organisers were all thrilled with the success of the competition and look forward to running a bigger and better event next year.

Photos and video at: www.inter-beach.net