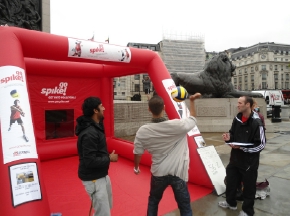 In August Volleyball England purchased a Speed Cage radar system – ‘The
Spike O Metre’ which measures how fast someone spikes the ball. It was used
at a number of events, the first being ‘Go Spike in Trafalgar Square’, which
along with the use of an outdoor court attracted 1,500 people.

BBC London were there to film the event – the footage can be viewed via the following link:
http://www.bbc.co.uk/news/uk-england-london-14718853

Go Spike events are continuing to run through the year with a number of key
events already confirmed. This includes Children In Need in November aswell
as Mike Bushell from the BBC having a go which will be aired in November.