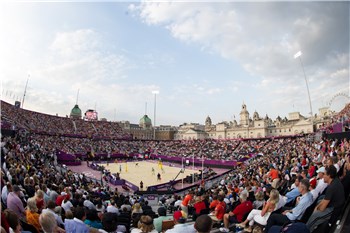 From the stages that were set at Earls Court for volleyball and erected from the ground up at Horse Guards Parade for beach volleyball, to the staff and volunteers who worked so diligently to prepare and maintain these classic ‘stages’, to the military personnel and police force that stood sentry so gallantly, to the world’s best performers who poetically and powerfully displayed their many talents upon each stage to the patrons who joyfully embraced these athletes as they labored so dramatically for their hour upon the stage, all is well history will catalog. Even the oft-jaded media were glowing in their stories, interviews, comments and photos from this historic XXX Olympiad. Earls Court is located in west London and Horse Guards Parade is in central London, next door neighbor to Prime Minster David Cameron’s home at 10 Downing Street.

And while each of those elements have been keys to the overall results of these Olympic Games for these two disciplines, the backbone has been the volunteers who have gleefully given of their time, talent, energy and experience provide a foundation to assist the other areas all reach unexplored levels of accomplishment.

Summing up the feelings of all concerned at both venues, FIVB President Jizhong Wei said with a openly grateful heart, “We thank all of the amazing volunteers. They are all very professional, very helpful and most of all very, very friendly here in London. Volleyball and beach volleyball owe a sincere debt of gratitude for all they have done to create such a harmonious atmosphere for athletes, fans and media. They have set a tone at both of our venues that have been exemplary and need to be publically recognized for their significant contributions to the successes of both disciplines at these Olympic Games.”

With the magnificent iconic venue at Horse Guards Parade that extended into adjacent St. James’s Park, a volunteer work force of nearly 275 gracious people catered to the needs of all of the participants and spectators.  With similar results at Earls Court, nearly 240 volunteers have extended the hand of friendship to thousands from across the globe.

Spectacularly supporting these two venues have also been several hundred active-duty military and London police force members at each venue.

Bob Clarke, LOCOG Volleyball venue manager, put it this way, “For me the Games with two venues starting on the same day, the first day of competition, I was so nervous and just wanted to hear the first whistle at 9:30 at HGP for BV or 9:30 here at volleyball and in front of full houses. Never before at a preliminary session have I seen full houses. The UK has to have the best sports fans, it doesn’t matter who was on court they would chose a side or vocally and enthusiastically support both. There were doubts and fears if there would be spectators here. We said there would be and there were.”

When the final whistle blows tomorrow after the men’s volleyball gold medal match at Earls Court Sunday, the two venues combined will have enjoyed the company of over 1 million spectators who all left their seats at center court hoping for more yet grateful for the experience they shared.  With slightly greater seating capacity at 15,000 and three days more of competition, Earls Court will see nearly 590,000 spectators come through the door while down at the beach at Horse Guards Parade, over 425,000 revelers enjoying the most athletic beach party anyone has ever seen. And ever seen at a more historic and iconic venue.

After all, at Horse Guards Parade, the stadium had Big Ben keeping time and London Eye watching out for things as HGP headquarters itself unashamedly overlooked the golden center court. A total of 96 of the world’s finest beach volleyball players, 24 two-person teams per gender, artistically drove their way across their special stage.

One particular volunteer, who has dutifully served on the media operations team at the Volleyball venue media center at Earls Court, native of Great Britain with 30 years in London, semi-retired Anthea Rogers, who still works for a conference company part-time, eloquently described her experience of the last three weeks.

Describing her time at Earls in the most royal of terms, Rogers chirped ever-joyful for the time she has had, “Quite honestly and frankly, I have had a lovely, wonderful times meeting hundreds of people that I felt I have known for years.  I’ve know that I would be helping at this venue since October 20 so I did some homework to learn something about a sport I had never seen before.  Certainly, whatever I learned from a book or online clearly pales in the reality of actually experiencing this sport and the Olympics in this rewarding way.”

Rogers eagerly added, “I have travelled abroad frequently, but I don’t believe I have ever met so many people from so many different countries than I have during these three weeks at Earls Court. The time I have spent here is far, far better and definitely more memorable than I could have ever imagined. Helping out at Wimbledon was my first choice when this all started, but looking back from here, I wouldn’t have changed anything.  The people have been so friendly it helps to understand how people from everything can come together in a peaceful competition like the Olympics. My husband and I have two sons and four grandchildren and I have stories to tell for a long, long time.”

Looking at the perspective of an athlete-turned television commentator, Australia’s Kerri Pottharst, Sydney 2000 Olympic Games gold medallist in beach volleyball and an Australian TV commentator at this year’s Olympics, summed up her feelings with a surprising twist, “I hesitate to say it, but the atmosphere at these Games has been the best ever. It surpasses Sydney’s Bondi Beach, and you should know what those Sydney 2000 Olympic Games mean to me, and we can only wonder how Rio 2016 will be able to top this!”

Three-time beach volleyball gold medalist Kerri Walsh of the United States, was outspoken in her praise after winning her third gold with Misty May-Treanor, saying, “We felt very at home with all the USA cheering, but it has a British twist to it. I am so happy with the venue and how the British have taken to it. I don’t have enough good words to say about the venue. It’s so much more beautiful than any other.”

Adding a British perspective to it, Great Britain’s Shauna Mullin said after she and Zara Dampney won a three-set beach volleyball match, “To bring home a win for Great Britain was amazing. The crowd was so huge and so loud, they just kept us going. It would have even been an amazing occasion whether we won or lost. Memories that we will cherish forever.”

As the final curtain falls on these two remarkable competition and the Olympic spotlight dims, the memories of Earls Court and Horse Guards Parade will forever reflect the spirit of the London 2012 Olympic Games vision to inspire a generation.