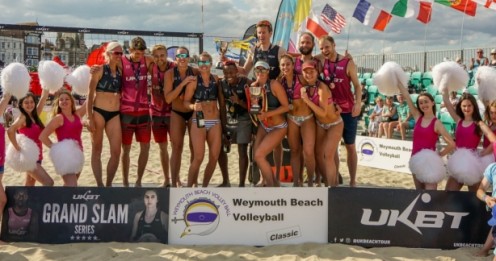 Last weekend saw the second instalment of the UKBT Grand Slam Series held on the prestigious Weymouth Beach. The sun was shining and the action did not disappoint with thousands of spectators passing by over the two days.

Palmer and Grimson got off to a slow start losing the first set 21-17 and then they were 15-10 behind in the second and looking defeated but a couple of strong serves from Grimson saw them regain confidence and they stormed back to take the set 21-19.

The final set went point for point until Palmer and Grimson were just able to edge ahead to take the match 15-13 and collect their second Weymouth title having previously triumphed in 2015.

The men’s final saw Issa Batrane from Bournemouth going for his third consecutive title with his new partner Phil Smith. Their opponents were first-time finalists Ivan Vatolik and his partner Piotr Kazik.

Batrane and Smith established an early lead and Vatolik and Kazik were never really able to pull the match back and lost 21-14, 21-15.

More than 100 players from all over the UK and Europe took part over the three days of competition. The two finals were played in front of packed crowds on the beach who had enjoyed an afternoon of great entertainment and were amazed by the power hitting of the men and the speed of the women around the court.

The women’s player of the tournament award went to Rastelli who particularly showed her incredible ball recovery skills.

The men’s accolade was awarded to Batrane who created history by winning the title three years in a row.

UKBT director Jake Sheaf said: “The weekend was a great success and the tour loves coming to Weymouth to play in front of such large crowds and to have such a well-organised and exceptional local organising team. A big thanks to all the staff, volunteers, players, spectators and our tour sponsors Wilson, Itsu and Aloha”.

Weymouth co-event director Pete Bennett said: “We are delighted how the weekend has gone and to see such great crowds for the final particularly after the dreadful weather we experienced last year. We would like to thank everyone who supported us putting on this great event, particularly Weymouth Town Council.”

The next and final stop on the Grand Slam Series calendar will see Bournemouth beach host the UKBT Championships. A huge festival of beach volleyball which includes the 5 star Grand Slam Championships event, the 4 star Plate Championships and a 1 and 2 star. As well as the UKBT awards night. For more info please check: www.deepdishbeach.com/summer-slamdown.