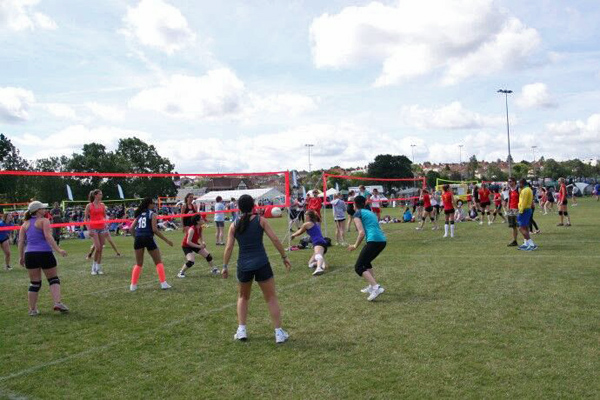 After 32 years in the centre of Bath, the 41st Whitefield Volleyball Tournament moved to its new venue at the South Bristol Sports Centre.

Feedback from the teams has been very positive with many commenting on the additional space available – both for playing and camping, but also in terms of the social facilities.

The new venue allowed us to slightly increase the size of the tournament to 147 teams playing on 28 courts, split into 10 divisions. On the Saturday they play for places in the top part of the division or the plate – so on Sunday everyone starts with a chance of winning a trophy.

There was, as always, strong competition across all divisions – but played in a very friendly atmosphere. A big feature of the tournament is the large gathering of family members and friends who come to visit, watch the matches and socialise.

Before the event there had been concerns from some neighbours – who had been used to being disturbed by football tournaments and “it’s a knock out” events. We had struggled to convince them that “volleyball was not like that”, but after the event had some really supportive feedback from neighbours. Typical of their comments were:

“The players themselves were excellent people, and it was good to see sportsmanship like this without all the bad language and shouting you get with other sports.  We experienced very little noise disturbance at night, and were impressed that there was absolutely no rubbish at all left around the pitch afterwards. We came down Saturday & Sunday to enjoy watching the matches and it all seemed very well organised with everyone enjoying themselves. Congratulations to everyone involved in organising the weekend event and I looking forward to seeing it return in the future. .”

So, volleyball has gained some new friends and supporters. 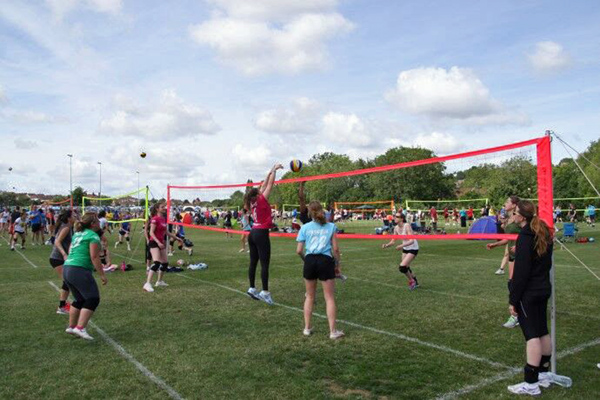 Congratulations to the winners of the 10 divisions – Stolen Llloveable Club, Malory, Inter Mixed, Purbrook Park, Riga, Umbongo, Can’t think right now, Smell of desire, Group Sets and St Albans Rascals. Overall 40 teams collected awards and there is a full list below. Congratulations also to Belper Volleyball Club – on their first visit – who were awarded the Bill Daniel Spirit of the Tournament Award.

We were also blessed with good weather and all in all it was a great weekend. While there were a few “teething problems” in using a new venue, we are confident that we will be able to sort out these small issues and are confident that most divisions will again be full very soon after entries open in late March 2016. The provisional date for the 2016 tournament is July 23 / 24 2016. We hope to see many old friends and some new entrants in 2016.