After 41 matches played across Sunday and Monday, London boys emerged victorious in both the U15 and U17 Competitions.  There was some incredible volleyball on display and all the Teams should be proud of their performances.

U15
It took the final game of the U15 boys group between East and London to determine the group winners, with East recording the decisive victory which saw them win the match 2:0 (25-18, 25-10) and top the group ahead of runners up London. South West finished the pool phase 3rd recording three victories along the way, with South East taking that all important 4th place to book themselves a place in the semi-finals.

Semi Finals
East v South East
East continued their good run of form from the pool phase and built up a commanding lead taking the first set 25-10. South East responded in the 2nd set but some strong hitting from the East seen them take the second set and the match 2:0 (25-10, 25-15) to book themselves a place in the final.

London v South West
London started off their semi-final match against South West in the right fashion taking some crucial early points which gave them a first set lead 25-15. South West picked up their game in the second set and made London work hard for their place in the final by gaining 3 points in a row whilst London were on set and match point, however it was London who managed to secure one final point to win the match 2:0 (25-15, 25-22) to book themselves a place in the final against East.

Final
The Final was a repeat of the close match between the East and London.  The East started fast taking the first set 25-16, but London bounced back winning the second set 25-20.  The final set was a tense affair that could have gone either way, but it was London who opened up a margin to win 15-13 and claim the title.

U17
Matches on Sunday were extremely close with three going the distance, and all three of them including the South East.  The East Midlands stunned the South East in the first match of the Competition.  The North East and West Midlands came into the competition with strong promise, and both lost out narrowly in their games on Sunday.  By Sunday night only London and the South West remained unbeaten. 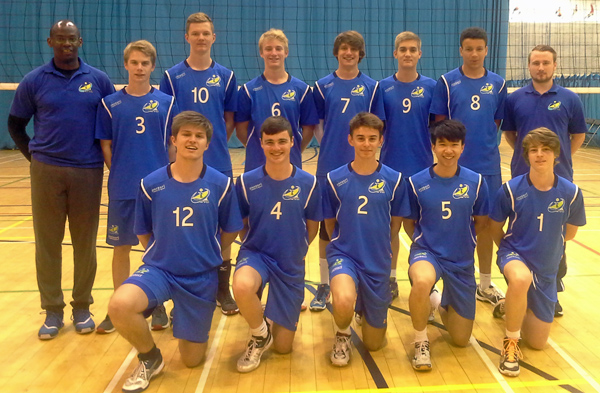 On Monday, the West Midlands recorded their first victory of the competition in the final match, meaning that all teams had won matches at the event, demonstrating how close the competition was, and how on a different day things could have been different.  The South East carried on where they left off, preferring to play 3 set volleyball, which probably went against them as they tired as the day went on.  The North East played the most sets with 11 and were competitive throughout despite only winning 2 out of 4 of their games on the day.  The East Midlands found their form from the first match of the Competitions to see off the North East and secure 4th place.

It came down to the Final game to decide the top three.  With the South West having lost narrowly to London, and the East having lost to the South West, both the East and the South West required an East win in the Final Game.  London had gone into the game with an air of confidence, having not lost a set in the tournament.  In the first set London started strong, but the East were game for a fight and despite an early London lead, kept fighting until the end.  London however proved too strong in the first set as they took it 25-20.  In the second set, there was still all to play for, and the East started quickly, opening up a gap on their rivals, and looked comfortable as they past the mid-point in the set.  However, London were not going to lie down, they would fight all the way, in the true spirit of Champions.  They took a pulsating set 25-23, and with it the title.

A special mention should go to the following for some notable performances across the two day’s play;

A full set of results can be found here

This entry was posted in Coaching, Junior, Volunteering. Bookmark the permalink.