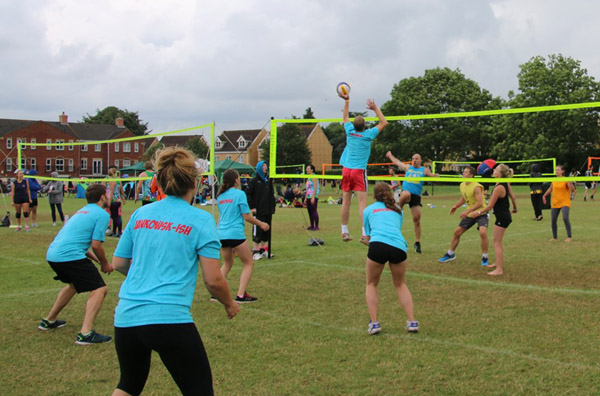 The Whitefield Volleyball Tournament is the largest volleyball tournament in the UK and will return to the South Bristol Sports Centre on the weekend of July 21/22.

The tournament attracts nearly 140 teams from all over the country and it is so popular that most divisions are full within a few days of the entries opening in April each year. There are still a few spaces left for teams who would like to join us, but please be quick in getting your entries in. You can enter online at: http://whitefield.cbvc.org.uk/

While the matches are competitive, the atmosphere is friendly and there will be lots of family groups playing or just watching. Many teams have been attending for 20 / 30 years.

The tournament is organised by the City of Bristol Volleyball Club with the organisers planning for the event from November to July each year. It is hard work to organise, but the reward is in seeing such a large number of people of all ages enjoying the matches and the social gatherings that the tournament affords.

Spectators are very welcome to come along and watch the matches and see the wonderful spectacle for themselves.