As it’s Children in Need time and you all appeared to have enjoyed Eleanor’s India item, you may not know that we have also sent Helen off to Zambia with a heap of Volleyball Equipment as well. It’s a slightly longer trip and you can keep up to date via her blog. 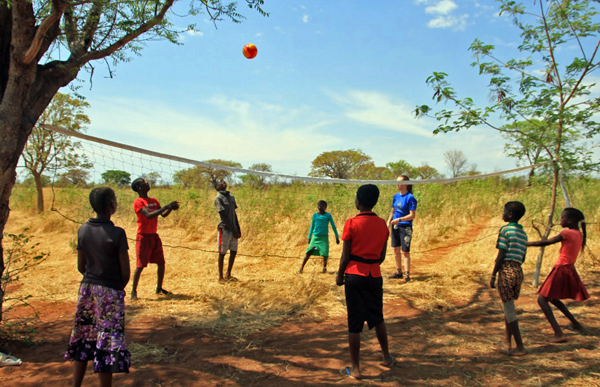 I’ve also done another week of Kids Club, this time at Natebe Primary School (Zambia). We always start with just playing games with the kids. I had the volleyball kit out again, and was teaching some of them how to play.

Some of them picked it up really fast and were actually quite good! I certainly wasn’t expecting to be encouraging them to move on from Catch-Push volleying to properly volleying in their first session!

Similarly I was able to have the second group playing a mini-game of 4s, with a basic “setter takes the second ball” structure. When it got to the lesson (somewhat later than planned as the teacher was enjoying playing volleyball too much and she wanted to keep going!), we were doing the same as last week, which meant I was able to lead a different section of the “Team Player” lesson.